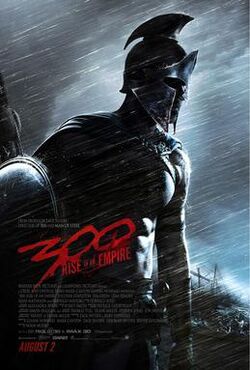 300: Rise of an Empire (previously titled 300: Battle of Artemisia) is the 2014 prequel to the 2007 blockbuster film, 300. Legendary Pictures has announced that Frank Miller is writsing the follow-up graphic novel, and Zack Snyder was interested in directing the adaptation, but chose to move on to develop and direct the Superman reboot Man of Steel. Noam Murro ultimately signed as the director, while Zack Snyder produced, and co-wrote the screenplay. The film is centered around the Greek leader, Themistocles, portrayed by Australian actor Sullivan Stapleton. The film was released in the United States on March 7, 2014.

The story pits Greek general Themistocles against the massive invading Persian forces, ruled by the mortal-turned-god Xerxes, and led by Artemisia, the vengeful commander of the Persian navy.

Knowing his only hope of defeating the overwhelming Persian armada will be to unite all of Greece, Themistocles ultimately leads the charge that will change the course of the war.

The film opens with the lifeless bodies of the 300 Spartans at Thermopylae. Xerxes advances on the corpse of Leonidas and beheads him to signify his victory. As Gorgo narrates the story, she mentions how the Greco-Persian War started with the battle of Marathon. The film then shows the Athenians, lead by general Themistocles, ambushing the Persians while they are docked. During the battle, Themistocles sees a chance to wound the Persian King Darius, and shoots an arrow into his chest. Darius' son, Xerxes, is also present, and dismayed by this. Yet as Themistocles beholds Xerxes, he knows that there will be repercussions for Greece.

The Persians subsequently retreat back to their realm, and Darius' admiral Artemisia arrives in time to hear the dying King's last words. Darius advises his son Xerxes to end the war with Greece and leave them to their ways, declaring only the Gods can defeat them. Xerxes mourns his father's death for seven days, but Artemisia still lusts for vengeance on the Greeks, and uses the opportunity to twist Darius' words. She tells Xerxes that he must become a God King to defeat the Greeks. She commands the priests to bless Xerxes and sends him into the desert. Xerxes eventually stumbles upon a cave and submerges himself in an otherworldly liquid. When he emerges again, he appears as a nine foot tall being draped in gold. He returns to Persia and declares war on Greece. To ensure his trust, Artemisia secretly murders all of Xerxes' closest associates.

Years later in Athens, the Athenian council are quarreling over the imminent Persian invasion.Themistocles convinces them that all of Greece must unite in order to repel Persia. This means an alliance with the Spartans themselves. Themistocles heads to Sparta to converse with King Leonidas, but when he arrives he learns that Leonidas is consulting the oracle at Delphi after rejecting the Persian emissary. Instead, Gorgo speaks with him, and he tells her of his plan to unite Greece. Themistocles requests the assistance of their navy, but Gorgo is reluctant to side with him, as she is only interested in the preservation of Sparta itself, not the whole of Greece. Themistocles reminds her however that if all of Greece is to be free, they must eventually fight too.

Themistocles and the Athenians rally their fleet against the Persians in the first battle of Artemisium. Before the battle, Themistocles discovers that Calisto has disobeyed his father and infiltrated the army. Themistocles is impressed and promises to watch out for him. When the battle commences, Artemisia commands her general to humiliate the Greeks. The Greeks however know of a weak spot within the Persian ships; the sides. The Athenians promptly ram their ships into the Persians, gaining the upper hand. Their formation of triremes proves unassailable. Eventually Artemisia grows weary of the battle and decides to let the Greeks enjoy their small victory. Artemisia has her general cuffed and thrown overboard for his incompetence, and recruits another in his place. However, this general fails when Themistocles lures him into a narrow straight, allowing the Athenians to ambush the Persians and gain another victory.

Artemisia realises that she has found her match in Themistocles, and sends an envoy to the Greek encampment. The Persian messenger requests that Themistocles meets Artemisia, whose boat is moored in neutral waters. The Athenians feel that it is a trap, but Themistocles decides to meet his enemy face to face. Themistocles meets with Artemisia, who compliments him on his tactics. Despite this however, she reveals that she can sustains losses for weeks, and her navy will eventually overcome the Greeks. Themistocles states that his life's ambition has been amassing the Greek fleet for her. Artemisia then offers for him to join her side, even going so far as to sexually seduce him. They have wild, passionate, violent sex, which Themistocles tearing her clothes and fondling her breasts and Artemisia straddling him; all the while, they are moaning and yelling loudly. After, Themistocles rejects her. Enraged, Artemisia sends him away.

In the next confrontation, the Persians pour oil into the sea and send in men with explosive kegs. This leads to the destruction of many Greek ships, and though the Greeks do manage to destroy the Persian oil ship it causes several casualties. During the battle, Artemisia shoots Scyllias with an arrow, killing him. Themistocles himself is nearly killed when his ship is destroyed in an explosion. With the Greek navy in tatters, Artemisia assumes victory and withdraws her ships. After recuperating with his remaining men, Themistocles learns that Leonidas and the 300 have been defeated at the Hot Gates.

Meanwhile, Xerxes is relishing his victory at Thermopylae. He then sends Ephialtes with a message to the Athenians' that the Persians are now coming for them. In Athens, Themistocles confronts the remorseful Ephialtes, who presents him with Leonidas' sword. Themistocles sends him back to Xerxes with the promise of war. He then sends the message throughout Greece of the Spartans' defeat. Later, Athens is razed by Xerxes' forces, with the God King brandishing Leonidas' severed head.

In Sparta, Themistocles approaches Gorgo once more and requests their navy. Gorgo, who is overcome by grief, feels that Sparta has given enough, and sends him away. Before he leaves, Themistocles returns Leonidas' sword to her, and urges Gorgo to avenge her husband. Gorgo ponders this as she weeps. In Athens, Xerxes gloats of his triumph over the Greeks, but Artemisia is less enthusiastic over her failure to sway Themistocles to her side. However, Ephialtes approaches them with news of the Greek fleet gathering in Salamis, lead by Themistocles. Artemisia immediately intends to destroy them, but this leads to a disagreement between her and Xerxes, who feels that she should not attack. Nevertheless, she is set on fulling her desire to wipe out the Greeks.

At the battle of Salamis, the Greek fleet are met by an overwhelming number of Persian ships. Themistocles' single plan is to defeat Artemisia. Both sides suffer great losses, until at last Themistocles and Artemisia confront one another. Both of them duel each other to a stalemate, at which point the Spartans suddenly arrive with a fleet of their own, lead by Gorgo. Xerxes, who has been watching the battle, turns his back and retreats, with a much larger army waiting on land. Themistocles disarms Artemisia and demands her to surrender, but she resists and is stabbed through the abdomen. Gorgo and Themistocles silently acknowledge their allegiance and lead the charge against the Persians.